The Amex Centurion Lounge in the Mexico City Airport has been recently renovated and reopened. This lounge is accessible to those with an Amex Platinum or Amex Centurion credit card. There are Centurion lounges in both terminals, but this review is for Terminal 2. The design of the renovated lounge reminds me of the Centurion lounges in the U.S. It’s pretty spacious with lots of different seating options. There are two floors to the lounge: upstairs, you’ll find the spa (and shower room), dining room, and tables; downstairs you’ll find a cafe/bar area, a small children’s area, and couches. There’s also a zen room tucked away (with a separate staircase from the rest of the upstairs). Centurion cardholders have access to a separate space. 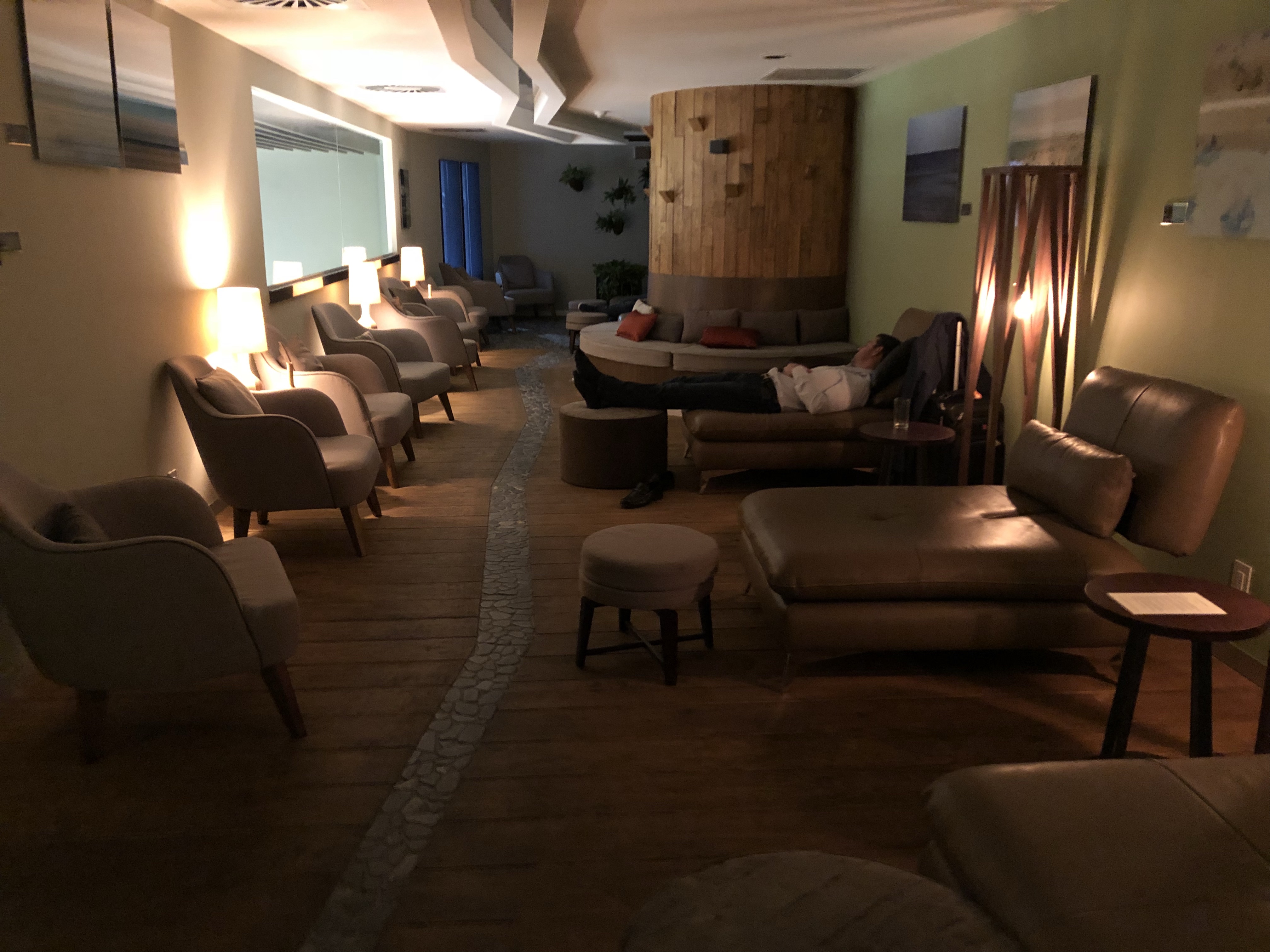 Only self-serve refreshments in the lounge? Found at the zen room Nothing is self service in this lounge, which means service can be slow(ish). There’s also potentially a language barrier (I am to blame for not speaking Spanish). But the hosts were generally attentive in offering drinks and food.

One thing that’s different about this lounge from Amex lounges in the US is that a lot of the food and drinks appeared to require payment. I was given a laminated card that said I was entitled to some food, but they have a more extensive paid menu of food options. Overall, it’s probably the nicest lounge I visited in MEX in terms of sitting (although it did get quite crowded by the time I left), but I’m not a fan of the weird a la carte menu.

This lounge is definitely the nicest lounge I’ve been to in the US, and it’s one of the best lounges I’ve been in period. I’d honestly say that it’s on par with some international first class lounges that I’ve been in. View from the terminal Upon walking into the lounge, I requested a shower room and a spa appointment. I had to wait a short while for the shower, and the lounge agent offered to announce over the PA when my shower room was ready. I wasn’t proactively offered a spa treatment, so you should ask if you want one, but I booked a facial since the wait was considerably longer for a massage.

The shower room was large and had L’Occitane amenities. I had major problems with water temperature (it would alternate between scalding hot and freezing cold), but otherwise it was a good shower room. Walking around the lounge, I was surprised by how small the lounge is. It’s not a particularly large space, but it was never too crowded during the time that I was there. There are a couple of different areas, including a couple of loungers if you want to try to sleep, but the lounge is missing good working cubicles if you want privacy or need to make a phone call. The food selection was good, and the quality of the food was better than what you’d find at most airport restaurants. I found plenty of tasty vegetarian food to eat, and the signs were helpfully marked to say what was actually vegetarian. The bar also had a good wine and cocktail selection, and I enjoyed a glass of Moscato with my lunch. The part that really makes this lounge stand out was the service. Perhaps it’s because of the newness of the lounge, but everyone was quite helpful. I was asked if I needed anything multiple times, and there were servers roaming around making sure that people never had an empty glass. The service might not have been the most polished, but it was eager and attentive, which is more than I can say about the ANA Suite Lounge or the British Airways Concorde Room.

Overall, I was really impressed by this lounge. It’s the nicest lounge I’ve seen in the US, they have some great amenities like free spa treatments and good hot food, and the service is friendly and attentive. I’m looking forward to seeing more Amex Centurion lounges open up in the future. You can get complimentary access to the Amex Centurion for you and two guests by having an Amex Platinum or Amex Centurion card.

It’s no secret that I love credit cards, and not just for miles and points. Credit cards often provide a variety of other benefits and consumer protections that make me prefer to use a credit card over any other form of payment, like trip delay insurance or return protection.

I usually don’t have occasion to take advantage of benefits like return protection or purchase protection because I just don’t buy that many non-consumable goods, but I recently decided to order some clothing online. Buying clothes online is always challenging because you often don’t know how they fit, and one of the items I wanted was final sale, so the store wasn’t willing to accept a return. But I figured that I’d use my Amex SPG for the purchase, which I know offers return protection. Return protection essentially says that your credit card company will cover you if the store doesn’t accept the return, provided that you call within 90 days of the purchase date and limited to $300 per item and up to $1000 total per year (see full benefits details)

Turns out that the final sale item wasn’t a great fit, and when I tried talking to the store’s customer service line, they said that they wouldn’t accept the return because it was final sale (and outside of the store’s 30-day return window). So I called 1-800-297-8019, which is the Amex Return Protection number, and asked to file a return protection claim. I reached a helpful phone agent who asked for basic information like the date of purchase, the items purchased, the total amount charged to the card, etc. And the next morning, I received an email saying that my return protection claim had been closed, and I saw a credit on my statement for the full value of the item I wanted to return. I didn’t even need to send the item to Amex. Pretty awesome, right?

Return protection is one of many reasons why I love credit cards. Obviously, don’t abuse protections like this, but it makes it easier to shop (especially online), when you know that your credit card company has you covered.