Hatsumode is the first shrine visit of the Japanese New Year. Traditionally, it’s a Shinto shrine, but as far as I can tell, it’s okay to visit a Buddhist shrine like Narita-san Shinsho-ji as well.

I was originally thinking about visiting the temple on New Year’s Eve, but I instead decided to go early in the morning to also watch the first sunrise of the year (hatsuhinode) from the temple (and the fact that there was no way I was going to be able to stay out until 3am on New Year’s Eve).

Even before sunrise, there were tons of people walking around Narita and at the temple. I made an obligatory stop to waft smoke on myself, as that’s supposed to be good for you. Fanning smoke on yourself for good fortune

There were tons of people throwing coins in the offering hall and praying, so I joined in to make an offering and wish for good fortune in the new year.

Around this time, there were huge crowds forming to watch the sunrise. It was a surreal experience to be part of a mass of people looking in the same direction, waiting for the sun to make its first appearance of the year. Crowds waiting for the first sunrise

And of course, seeing as it’s now 2014, people of all ages had a phone/camera/tablet out to make sure to memorialize the moment. I was more interested in photographing the people photographing the sunrise, but I couldn’t resist taking a photo or two for myself. 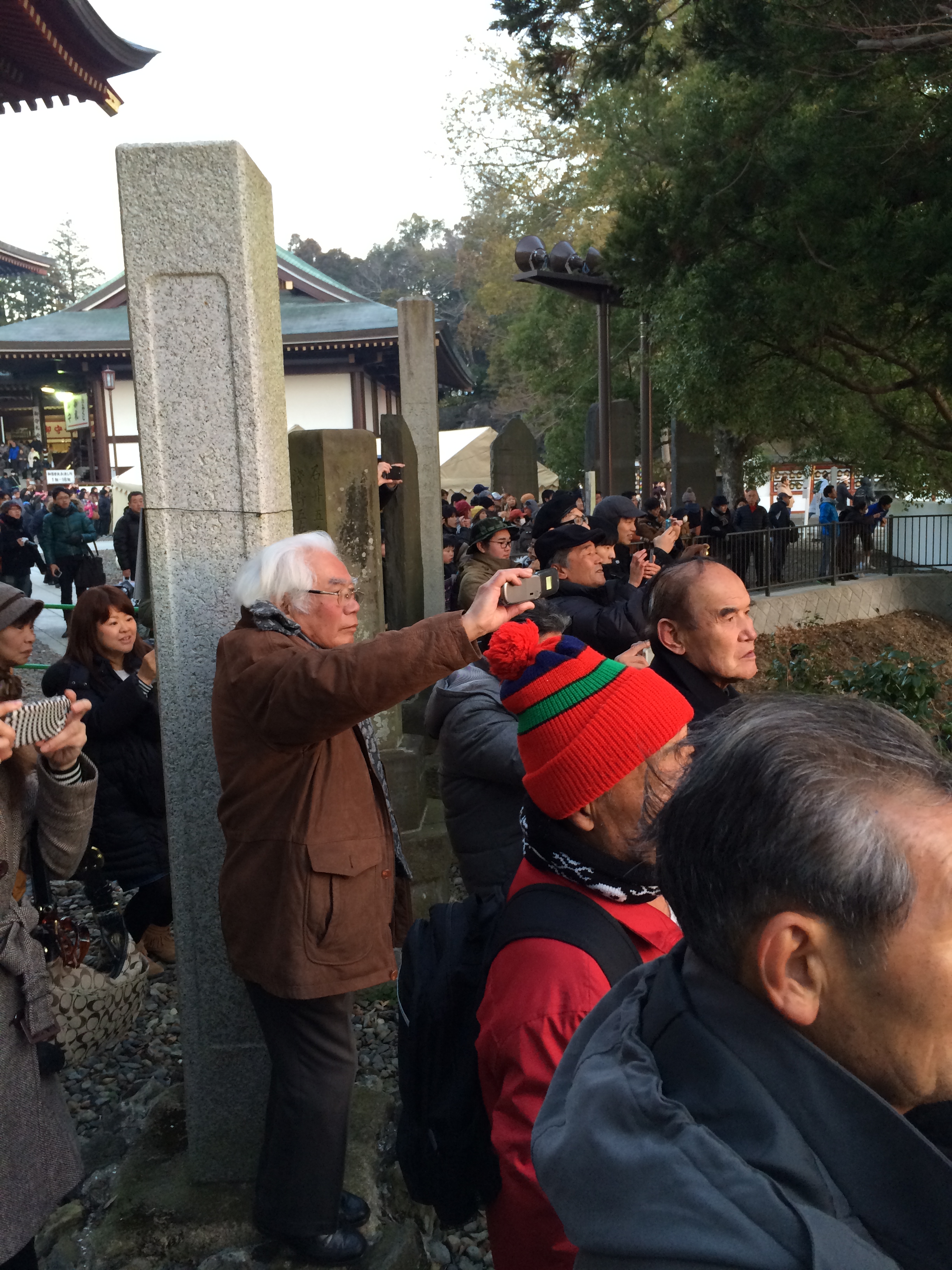 First sunrise of the year

After watching the sunrise, I walked around the temple grounds. It felt festive and joyous and full of hope for the new year. I walked over to a place to get omikuji, or written fortunes for the year, but I decided not to tempt my luck and just wait to see what this year will bring. If you’re in Japan for the new year, you should definitely make it a point to stop by a shrine and experience hatsumode.

I decided to spend my last night in Tokyo not in Tokyo at all but in Narita. My flight wasn’t so early that I had to stay near the airport, but I had read that one of the most traditional new year’s activities in Japan is to go to a temple, and Narita has one of the largest temples and most-visited temples. Since I had a small stash of Hilton points, I chose to redeem 20k Hilton points for one night at the hotel.

To get to the hotel, I took a JR train to Narita station, and then took the hotel shuttle from Narita station to the hotel. The shuttle wasn’t particularly convenient as it didn’t run very often, was shared with two other hotels, and often made stops at the Aeon mall. Garden/waterfall in the center of the hotel

Check-in was relatively quick, and I received a voucher for breakfast and a pass for the gym and pool. I received a room on one of the top floors, and I believe it was an upgraded room as it was quite large. The bed was comfortable, the room temperature could be controlled, and it was simple yet functional. The hotel isn’t far away from the airport at all, so I could occasionally hear planes arriving and departing. It also made for some good plane watching, as I even saw the Turkish flight that I had arrived on. I decided to check out the gym and pool, and while the gym was quite large, I didn’t see a squat rack or any other place to lift heavy free weights, so I didn’t work out. 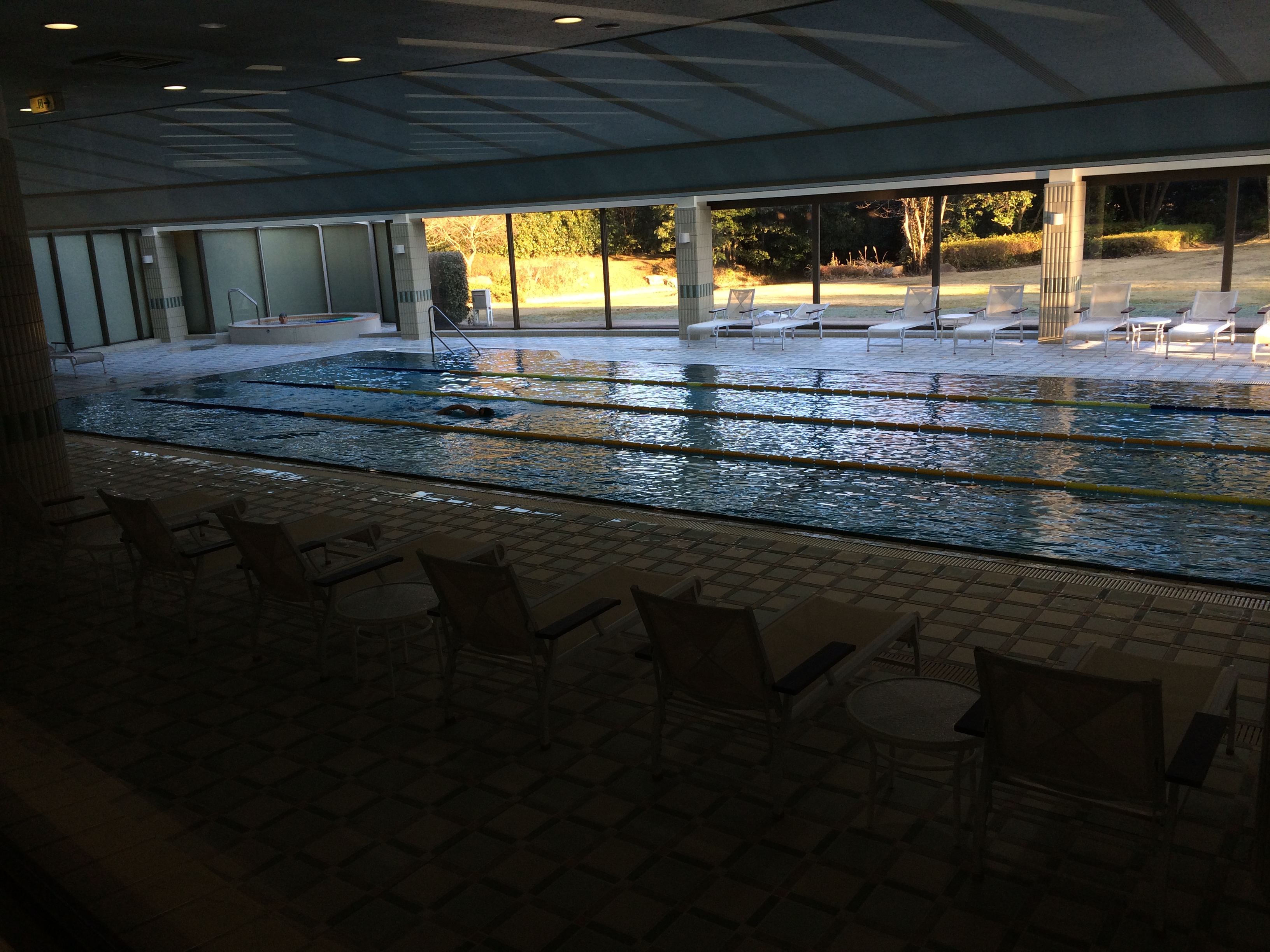 The most interesting feature about the hotel is that it seems like every single airline’s crew stays here. I remember seeing crew from United, Air Canada, Swiss, and Emirates, and that’s not even half of them. Definitely the place to stay if you want to socialize with/get to “know” airline crew.

Breakfast the next morning had a decent spread but was quite crowded. I enjoyed squeezing chocolate and peanut butter out of tubes, and all of the buffet items were replaced regularly. There was plenty of western breakfast items as well as Asian foods like congee. Overall, it’s a decent hotel near the airport and a good use of Hilton points since you’re not going to get much else out of them since the devaluation. While the hotel shuttle isn’t that convenient to/from the town of Narita, it’s passable, and Narita is an interesting place to walk around for an afternoon or night.